The Wanna-Be Potter and the Clay

I looked at the package in front of me with anticipation.  “This,” I thought, “Is going to be perfect.”  I unboxed my new prize with gusto and set it up in front of me.  The kitchen table might not have been ideal, but it was the best place that I could think of.  I knew it would be messy, but I had newspapers, water, and paper towels.  Without further ado, I took out a good sized piece of clay and put it on my brand new (plastic) potter’s wheel.  I had seen the process a dozen times, so surely it could not be that hard.  Much to my disgust, when I put my hand to the clay and began to shape it, the clay kept doing funny things that I did not intend for it to do.

Lacking any patience with it, I became frustrated that my first attempt was not perfect.  Angrily, I  threw the offending clay (which was sopping wet) back into the container and angrily stomped off.  “I never want to work clay again! I am not even going to try anymore!  I’m just not good at it.” I declared in a huff.  Of all things…. My husband started laughing…. And then he had the nerve to patiently craft a piece of clay into something that actually looked halfway decent!  That was the point that I realized that I had been letting perfectionism eat at me.  I needed to transform my perfectionism into something more productive.

Transforming perfectionism is a battle that I have personally fought.  Growing up I thought that I had to be perfect.  There was pressure on me all the time, most of which was self-induced. I felt like I had to be the best of the best in everything.  There were a few exceptions where I decided to actually kick back and have fun, but for the most part, I was a chronic perfectionist.  I held myself to an impossibly high standard, and as a result, I felt like I was in a constant struggle.  Instead of making me feel perfect, my perfectionism just made me feel inadequate. 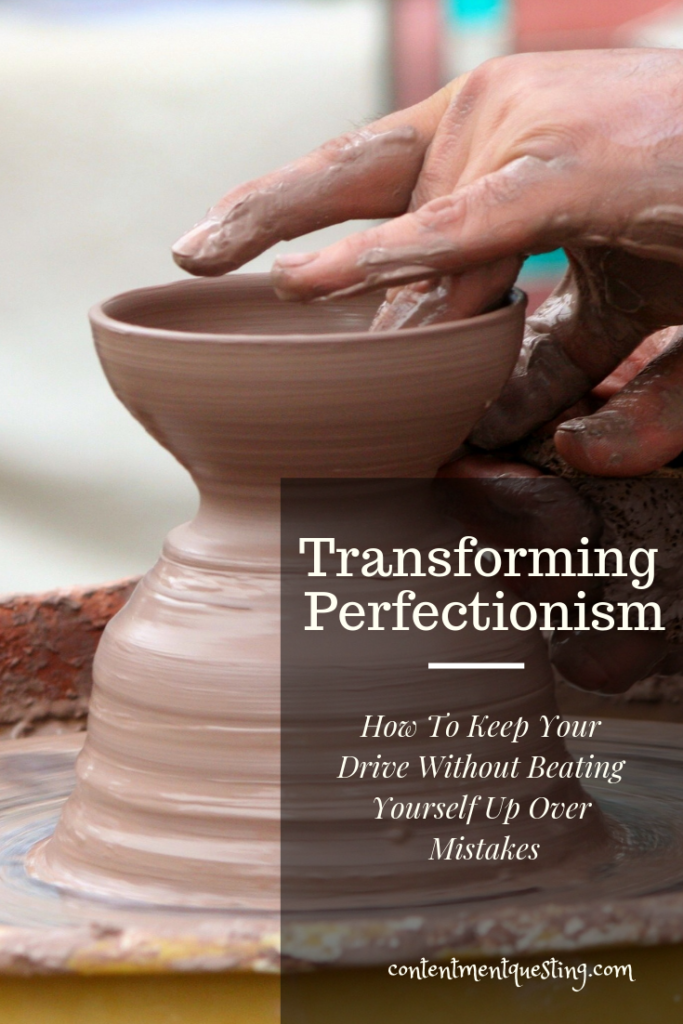 What is the Definition of Perfectionism?

The definition of perfectionism is pretty simple.  When I looked it up online, it simply said, “refusal to accept any standard short of perfection.”  Funny how such a short definition can cause so much havoc in our lives.  This is where I was at.  I tried to be absolutely perfect in every way and, of course, I felt short of the mark.  I didn’t want to accept that I was only human and that failing sometimes is a part of life.  To my flawed thinking, I thought perfectionism was a good standard because it meant that I cared and that I pushed myself to be better.   Transforming perfectionism keeps those ideals of caring and wanting to better ourselves, but without being so hard on ourselves.

I think that each person and situation are unique.  Different people may have different factors that contribute to their perfectionist tendencies.  It may be a person’s beliefs about themselves, or it may be an external factor.  For most people, it boils down to believing that their self-worth is tied to their achievements.  Such was the case for me.  When you are on your journey of transforming perfectionism, that is your main challenge: shifting your focus to where your self-worth is not based on your accomplishments.

For myself, I tried to be the perfect daughter.  I thought if I could just be the smartest kid in school, then I would be worthy.  If I could just make not only straight A’s but the highest A’s possible, I would achieve something to be proud of.  I did well, but I was not valedictorian or salutatorian.   I beat myself up over every question I missed on a test even though I studied as hard as I possibly could. To me, I didn’t really view myself as all that brilliant, but I worked hard at it and wasn’t afraid to ask questions.  What I wanted other people to see when they looked at me was someone that was smart, sweet, maybe even pretty.  What I actually felt was inadequate, stupid, and the ugly duckling of the school.

I didn’t see my accomplishments.  When I viewed the world through the distorted lens of my perfectionism, I saw me trying as hard as I possibly could and failing over and over again.  The problem was not with my actual accomplishments. The problem with perfectionism was that I was setting impossibly high standards for myself and beating myself up over each and every perceived failure.  That’s why I needed to transform my perfectionism into other more beneficial habits.

In my own opinion, perfectionism is not always a bad thing.  According to some, it’s also a personality type.  Some good traits such as being reliable, responsible, dedicated, driven, and persistent come from perfectionism. That’s why I saw nothing wrong with my own perfectionism before.  With the good, also come some bad traits such as critical, unrealistic, approval seeking, prone to depression and anxiety.  That’s why it’s my stance that we should not completely overcome perfectionism, but instead channel and transform perfectionism.

An Example of Transforming Perfectionism

In order to illustrate perfectionism, let me share a personal story with you for a metaphor.  I had to get the grass mowed today.  It probably should have been done yesterday since it’s going to rain all weekend, but life happened.  So this morning, I decided to conquer the task.  Morning is not the best time to mow the grass since it’s wet from the dew, but I decided to do it anyway in an attempt to complete the task before a torrential downpour.

So there I was, happily mowing the grass, lost in my own thoughts, and the sound changes. Uh-oh, I thought. I know what that means. The belt came off…. Again.  So I stopped the lawnmower, cleaned out the grass and attempted to locate the problem.  Sure enough, the belt that controls the blades had come off.  So I tried to put it back on, to no avail.  Instead of sending my husband a text that simply said “oopsie” (He knows what this means. His usual response is “How bad is the mower this time?”)  I decided that I was GOING to solve the problem myself.  So I searched on google for a diagram and found my mistake.

With a certain amount of grumbling and “stupid thing designed by men, why does this belt have to be so hard to get back on here?”  I got the belt in what I was fairly sure was the right place. (Apologies to my male readers.  It’s actually quite easy to get back on if you know how to do it.  I just didn’t know what I was doing.  Working on the lawn mower is not my strong point.)  I got back on the mower, started it and engaged the blades.  I was thrilled to hear them kick back on.  So as I continued mowing, mentally patting myself on the back and congratulating myself on my persistence and cleverness, I noticed a cloud of blue smoke behind me and a distinct “burnt rubber” smell.

“Well, crud!” I thought to myself. “It’s the belt.”  So I stopped the mower and again looked at the belt.  The way that I had it routed, when I engaged the blades, the belt was rubbing against itself and creating friction and heat.  The mower was mowing grass and the belt configuration was functional BUT had I not stopped, it would have rubbed against itself till the belt broke, or it busted out in flames.  It was harming itself.

That’s what perfectionism does to us.  It works, but if left in the wrong configuration, it harms us and we risk burnout.  Like the mower belt, we have to learn how to adjust our perfectionism so that it does not create friction in our lives but still drives us forward.   Consider this your personal “diagram” on how to properly adjust your “perfectionism belt” so that you still get all your forward drive without it causing friction and self-harm in your life.

Let’s keep the good traits, and lose the bad ones. It’s good to be reliable, responsible, dedicated, driven, and persistent.  If you are struggling with trying to transform your own perfectionism you might try:

Make sure that your goals are relevant, timely and achievable.  If you are shooting for the moon, then make sub-goals that are bite-sized, achievable chunks.  Allow yourself to celebrate your victories.

Allow yourself the luxury of being human.  Treat yourself with grace.  Don’t beat yourself up because you made a mistake. Forgive yourself and move on.

·         Trusting in Yourself and Your Ability to Handle Things

Often we want to try to maintain an illusion of control and that’s part of why we are so detail oriented.  You can’t control life.  Trust in your own ability to handle whatever comes your way.

·        Remember Imperfect Action is Better than No Action

In the blogging world, and elsewhere there is a saying that “Done is better than perfect.”  Imperfect action is better than no action at all.  Yes, you will make mistakes. Mistakes are ok. That’s how we learn.

Yes, you will mess up. You are human, and it’s ok.  It’s ok to make mistakes and mess up from time to time.  Some of our best lessons come to us as a result of mistakes.  Learn from them and move on.  It was a learning experience. It’s not something to beat yourself up over.

So are you a perfectionist like me?  I often hear the term “recovering perfectionist.”  I guess it fits me, but I prefer “transformed perfectionist” because when you transform perfectionism, it implies conscious intentional change.  We want to take the good traits of perfectionism and keep them while getting rid of the negative self-harming ones.  Give yourself the grace to be human.  Be nice to yourself.  Trust in your own ability to handle things.

Control is nothing more than an illusion.  It never lasts forever.  However, I know that whatever comes up, you have the ability to handle it.  Do not allow yourself to be paralyzed by fear of failure or to procrastinate for too long.  Imperfect action is better than no action.  Yes, you will make mistakes, but they are learning experiences. Make sure that your goals are realistic and have a time frame.  This helps prevent procrastination and gives you something to celebrate when you reach one of your goals.  What are your best tips on transforming perfectionism? Leave me a comment below!