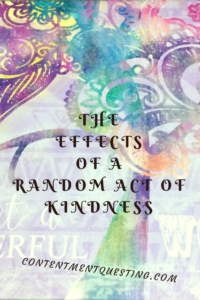 Hello friends! I want to share something with you today that really touched me.  I have seen more than one article about doing random acts of kindness.  Just as important as doing them, I think, is knowing the effects of a random act of kindness. I am usually the one that blogs about and tries to do them, but over the past weekend, something happened that caught me completely off-guard.

Just a normal evening and then – surprise!

I was cooking supper on Friday night at home and the phone rang. It was a friend of mine and she asked, “Are you home?”  I was suspicious at first but told her to come on over.  She came in with a big box, and it was beautiful.  It was not Christmas paper, and it was nowhere near my birthday.  Printed on the purple flowers of the backdrop were the words “What a Wonderful World.” 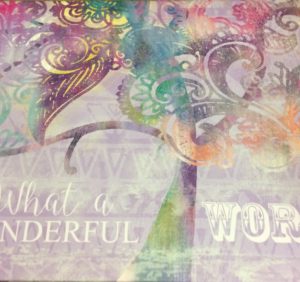 Still not understanding, I took the box from my friend as I struggled to figure out what was going on.  The first thing that struck me was the weight. The box was heavier than I expected.  I opened the lid and was greeted with an array of baked goods and bought sweets.  They were all tied up with pretty, artsy twine thread and a few tins, hot chocolate mix, salt water taffy and fancy chocolates, and other various goodies.  What struck me the most was 2 words written on a piece of paper in the right-hand corner.  It was the answer to the question running through my mind. The 2 words read, “Just Because. :)” 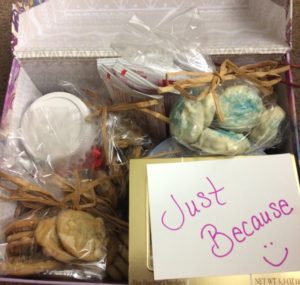 Immediately, I felt tears prick my eyes.  I hugged my friend and thanked her.   She did not expect me to respond with tears in my eyes because to her, it was no big deal.  She even said, “I didn’t know you’d like it THAT much!”  After I thanked her, she did not stay long.  My tears continuing for the next half hour.  I was so touched.  She did not realize that her gift had come at just the perfect time.  The Lord has used her to bless me and to answer a prayer that I had prayed 2 nights earlier.

What happened 2 nights before

Friends, have you ever had a time in your life where you were trying to live your life in the direction that God has for you but you are struggling?  You know that you are doing the right thing, but by golly, some days are just downright HARD?! That’s where I was a few nights before my friend called me.  Overall, I’m happy.   I’m where I should be in my life, and doing what I ought to.  The path I am going down is full of challenges, just as all worthwhile paths are.  I realize that these challenges will help me to become a better person.  I will grow as a result of these challenges, but some days, I need encouragement.

Two nights before my friend called me and brought me that box I had a particularly challenging night.   I got so frustrated and angry that I went for a walk to calm down.  I ended up walking for a very cold and dark mile and a half.  Yes, I took a flashlight, yes, someone knew where I was, I took all the safety precautions.  I used the walking time to try to talk myself through all my feelings.   I tried to reason everything out and abate my anger and my frustration.  However, at the end of a mile and a half with my legs half-frozen, I still was not ready to come in.

I texted my husband that I was back and I sat outside on the swing. While I looked at the stars, I talked to God and poured my heart out.  I told him how hard I was trying and asked him for strength, guidance, patience, and to feel his presence with me.

Why her Act of Kindness Meant so much

When my friend brought me that box of goodies, I felt HIS blessing, through her.  I was reminded that I am not alone. Ever. I felt like my prayer had been heard and answered and that I had just received some much-needed encouragement.  That is why those tears sprang to my eyes.

Friends, I have written all this to say that even if something does not seem like that big of a deal to you, it can mean the world to someone else.  Your random acts of kindness do not go unnoticed.  Sometimes they might be un-appreciated, yes, but that is no reason to stop.  It’s like swinging a baseball bat.  Sometimes you swing and miss, but other times you can hear a resounding *WHACK* and know you have knocked it out of the park.  Other times, you cannot fully see the effects that your random act of kindness has on another person. We just have to trust that we did our best and take joy in knowing that we did a good thing.

Thank you, my friend, for more than just a box of goodies. Thank you for touching my heart and thinking of me and keeping me continually in your prayers. Most of all, thank you for being my friend.

I was shopping for groceries a few days later and was sticking to my list of JUST the things needed for this week’s meals. Standing alone in an aisle, I was thinking of nothing but what I needed to get when a lady approached me.  She politely explained that she had run over by $1.60 and had no more money on her to buy her groceries. Her words were desperate as she explained that she did have more money, but it was at home.  She explained that she was hungry and did not want to walk back home to get it and all the way back.  With embarrassment in her eyes, she asked if I could spare $1.

As she talked, my brain kicked into overdrive processing things as fast as I could. 1) She’s telling the truth. She just wants her food and then to go back home. Anyone can go over by $1.60.  2) Walked. Who walks to the grocery store? It’s misty and cold and dreary.   People that don’t have a car, that’s who.  3) She is going through some rough times if she does not have a car.  4) This is my chance to help.  I have some cash.

As she finished her story, I responded with “Well sure!” and she looked surprised.  I got out my wallet, and I had two $5 bills and a $20.  I took out one of the $5 bills and handed it to her.  She still looked pretty shocked at my “well sure!” response, and then she looked in her hand and realized that I had not given her a $1 bill as she had asked for, but a $5 bill.  Her eyes teared up, and she gave me the biggest most sincere hug I had received all day.  I hugged her back and whispered, “bless you.”  And she repeated it to me.  She hurried off, presumably to pay for her groceries and get back home and eat because when I went to the front of the store I looked for her and she was gone.  I had several thoughts about this, the first one was that the Lord provides us with what we need, and sometimes a little extra, like I described in my Happiness post.  She looked like I felt when my friend brought that box of goodies to my house.  The second thought that I had was kicking myself for not giving her the $20 bill instead

Often, the Random Acts of Kindness that we do for others are things that we think of as no big deal.  I’m not going to miss that $5, but I could tell from the look on her face and the fierceness of that hug that it was a lot to her.  When my friend brought me that box, she was surprised by my reaction too.  She said she was bored and had been baking with the kids and was just an attempt to “make her friends fat with her.”  (She is NOT fat, by the way; that was just her teasing remark.)  Little things can be powerful. Little things add up, and sometimes our little things are very big to someone else.

Do you have a Random Act of Kindness story? I would love to hear it! Leave me a comment below!

Ways I can be Kind: Written by a 10-Year-Old Boy

5 Ways to Increase Your Happiness

2 thoughts on “The Effects of a Random Act of Kindness”

This website uses cookies to improve your experience while you navigate through the website. Out of these, the cookies that are categorized as necessary are stored on your browser as they are essential for the working of basic functionalities of the website. We also use third-party cookies that help us analyze and understand how you use this website. These cookies will be stored in your browser only with your consent. You also have the option to opt-out of these cookies. But opting out of some of these cookies may affect your browsing experience.
Necessary Always Enabled

Any cookies that may not be particularly necessary for the website to function and is used specifically to collect user personal data via analytics, ads, other embedded contents are termed as non-necessary cookies. It is mandatory to procure user consent prior to running these cookies on your website.