(This post contains affiliate links. If you click on a link and make a purchase, I will receive small compensation for your purchase, at no extra cost to you.  Thank you for your support! For more information, please see my disclosure.)

Are procrastination and laziness the same?

Laziness is being able to do carry out a task that we ought to do, but not being disciplined enough do so because of the effort involved.  Procrastination, on the other hand, is where you put off one task in favor of another that is perceived as more pleasurable but is typically less important.

No Time to Read Now? Pin for Later! 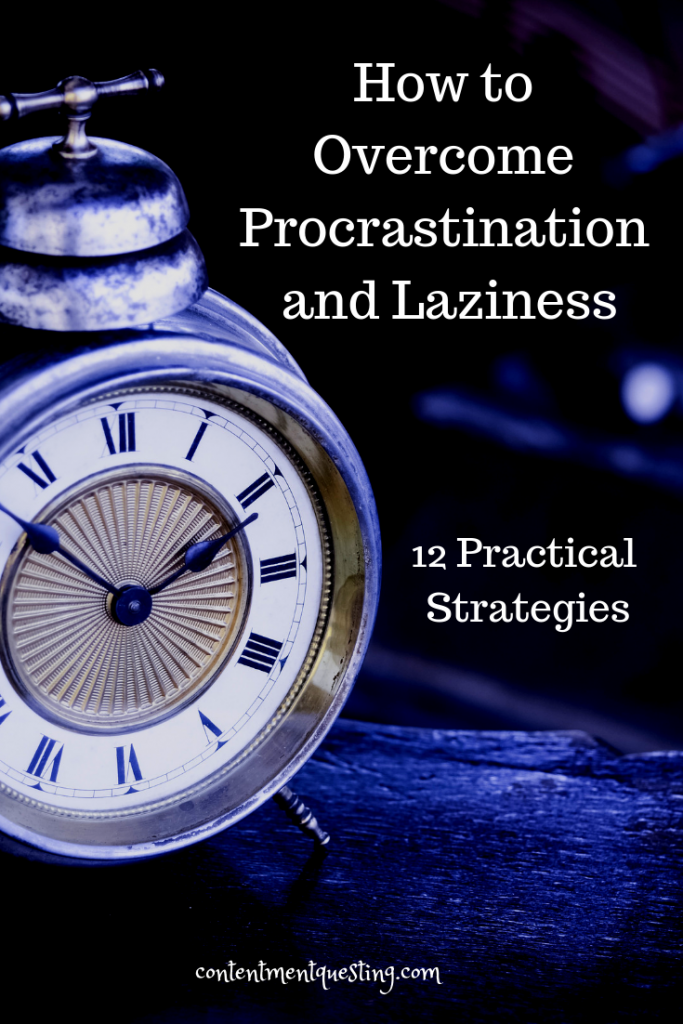 Is Procrastination a Mental Illness?

However, if you procrastinate ALL the time where it becomes a chronic behavior, it can be a symptom of several mental health issues such as anxiety, depression, attention deficit disorder, or obsessive-compulsive disorder.

Most of the time, procrastination can be addressed with time management training and organizational skills, but if the root cause is mental health then that will certainly need to be addressed as well.

If you find a health-related issue that you are concerned about, don’t procrastinate there!  If you think you might need to go get checked out, take the leap and get it done.

Is Procrastination Just a Bad Habit?

Most of us that procrastinate, probably do so because it has become a bad habit.  It’s so much more fun to watch just one more youtube video or spend just a few minutes scrolling through Facebook.  Then somehow, those few more minutes turn into hours. The thing is, that most of the time we procrastinate, we do so because we know that we will eventually get it done.  However, for the time being, let’s just do one more thing that’s more pleasurable and gives us immediate gratification.

Why Do We Procrastinate?

If we want to learn how to overcome procrastination and laziness, let’s look at the reasons why we procrastinate in the first place.  Research shows that in general, people procrastinate for 4 main reasons. They are:

Do any of these reasons ring true with you?  Chances are, you can identify with at least one, if not more of them.

Tim Urban has a very funny TED talk on procrastination.  I laughed all the way through it.  In it, he talks about chronic procrastinators having an “instant gratification monkey” that is at the steering wheel of our brain when we have a task to do.  The Deadline Monster scares the monkey, and when it approaches, the monkey runs. This gives us hyper-ability to focus and get the task done. Can you relate? 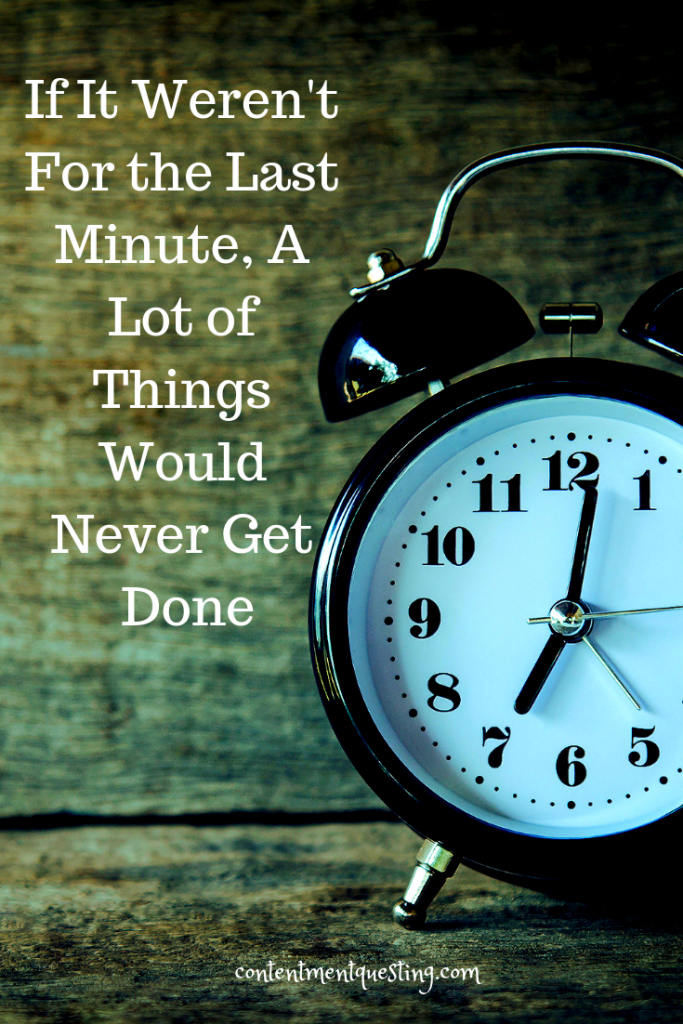 Are There Good Effects of Procrastination?

We think we want to learn how to overcome procrastination and laziness, but can procrastination actually be a good thing?  According to psych central, there can be benefits to procrastination in some situations.   Procrastination can help us learn to manage delay, it can give us time to get our thoughts in order or our emotions in order, and it can also lead to more creative thinking at times.

What are the Bad Effects of Procrastination?

Chances are if you clicked on this article about how to overcome procrastination and laziness, you know very well what the bad effects of procrastination are.  It can lead to poor academic performance, the task is rushed and not as good quality as you could have made it had you started sooner. Procrastination also makes you feel bad mentally and physically.  If I stayed up all night studying for an exam, I would not physically feel good in the morning from lack of sleep. I would also feel guilty for not starting sooner. Additionally, if you procrastinate at work or on a group project, it adds to the workload of others.

12 Practical Strategies for How To Overcome Procrastination and Laziness

Now that we have looked at all the whys and the good and bad effects of procrastination, let’s get down to the nitty-gritty of how to overcome procrastination and laziness. Mindtools has some great ideas, as well as some of my own.

1. Recognize that you are procrastinating

The first step to changing any behavior is recognizing the behavior.  When you find yourself procrastinating, it’s helpful to say to yourself “I’m procrastinating” and then you can start delving into the next step, which is the “why.”

2. Identify WHY you are procrastinating

When you are learning how to overcome procrastination and laziness, it’s much easier when you can identify both why you are doing it and your triggers.  A large part of habit changing is controlling our external environment. If you can realize that you start procrastinating when you sit down with your laptop and the tv is on, then you can do something about it.  Likewise, if you can identify that you are procrastinating because you are afraid of failing, it may be that you need to break your big goal down into smaller goals. (Which we will talk about in a bit.)

3. Forgive Yourself for Procrastinating in the Past

Sometimes we make mistakes and beat ourselves up for things that we did in the past.  It can be all too easy to use those mistakes to label yourself. Our self-talk is powerful.  If you start labeling yourself as a chronic procrastinator, then you will likely become one because that’s what you are programming your mind to do.  However, if you tell yourself “Yes, I have procrastinated in the past, but I forgive myself and have learned from my mistakes. I will get this task done before the last minute.”  that statement acknowledges the fact that you procrastinated in the past, and also acknowledges the lesson as well as defines a new desirable behavior.

See Also: The Best Advice on How to Silence the Inner Critic

How to Cultivate Positive Thoughts

Brain Tracy has a book called “Eat That Frog! 21 Great Ways to Stop Procrastinating and Get More Done in Less Time.”  I have not read it yet, but it is on my to-read list. He defines frogs as tasks that you have to do.  From the book summary that I read, he recommends that you should eat the biggest, ugliest frog (the task that you least want to do) first and to finish it completely.  That way the rest of the tasks you have to do in a day are easier.

Another tip for overcoming procrastination and laziness is to reward yourself.  When there is something that I really don’t want to do, I plan a reward for myself afterward.  I want the reward, so I hold myself accountable to do that task.

6. Set a time frame and stick to it

When you are trying to overcome procrastination and laziness, set a time frame and stick to it.  Let’s face it, if I am procrastinating cleaning the house, I don’t want to do it. When I DO start, I don’t want to spend all day on it.  I set a reasonable time frame and stick to it. You will be surprised what you can get done when you have a deadline!

Similarly, many people find time-blocking a great way to manage their time.  With time blocking you carve out a block of time on your daily schedule to devote to a certain task.  For example, if I was going to time block the time that I work on a post, I might say that I will write from 7:30 am – 9:30 am, which gives me a solid 2 hour time block to get a post written.

8. Get an accountability partner

When you are trying to figure out how to overcome procrastination and laziness, another great way is to get an accountability partner.  Sometimes we just need to know that someone is going to hold our feet to the fire. I have an accountability partner. Just knowing that I will have to report to her if I don’t get my goal accomplished, puts a fire under my tail to get it done. (usually early)

The TV on while they work may not bother some people, but I’m not one of them.  If the TV is on, I can hardly work. My husband sat down and turned it on the other day while I was working.  I picked up my laptop and went to our bedroom.  I know that I will not get much done if the TV is on.

Similarly, if my phone goes off while I am working, or I have all my notifications turned on, it hinders my productivity.  Minimize your distractions while you are working so you can focus better and get your task done. This also helps in not getting sidetracked while you are working on a task and procrastinating.

I love my to-do list.  It actually one of my secret weapons for how I overcome procrastination and laziness.  My to-do list motivates me to do the tasks at hand because I get satisfaction in crossing things off the list.  It also gives me a visual reminder of what I have gotten accomplished in a single day. When I make a to-do list, I am less prone to procrastinate because I know that if I do, I will be staring at a list of un-done tasks at the end of the day.

How to Build Your Motivational Skills

11. Break your big goal down into smaller sub-goals.

Sometimes we set goals that are so big that they overwhelm us.  Setting goals to chase your dreams is great. But it becomes not so great if you are so overwhelmed that you do not know where to start.  When I started the year this year, I did not even know where to begin when it came to goal setting. I knew I wanted to set some goals that would challenge me, but I had no clue where to begin setting those goals.  What helped me was purchasing a Slay Your Goals Planner, which you can see the review for here.

Breaking your goals down into sub-goals helps because it’s easier to manage bite-sized chunks that bring you closer to your big goal than it is to focus on a large goal that’s way out in the future.  You might just be procrastinating because you don’t know where to begin.

12. Do one thing that moves you closer to your Goal

My husband is fond of saying “Progress begets progress.”  Even when you break your goals down into smaller sub-goals with a time frame, there are some tasks that you really just don’t want to work on.  It would be so nice to not overcome procrastination and laziness in those cases! However, when you do one little step, you feel like you made a bit of progress.  That progress motivates you to do a little more.  Seeing progress is fulfilling. 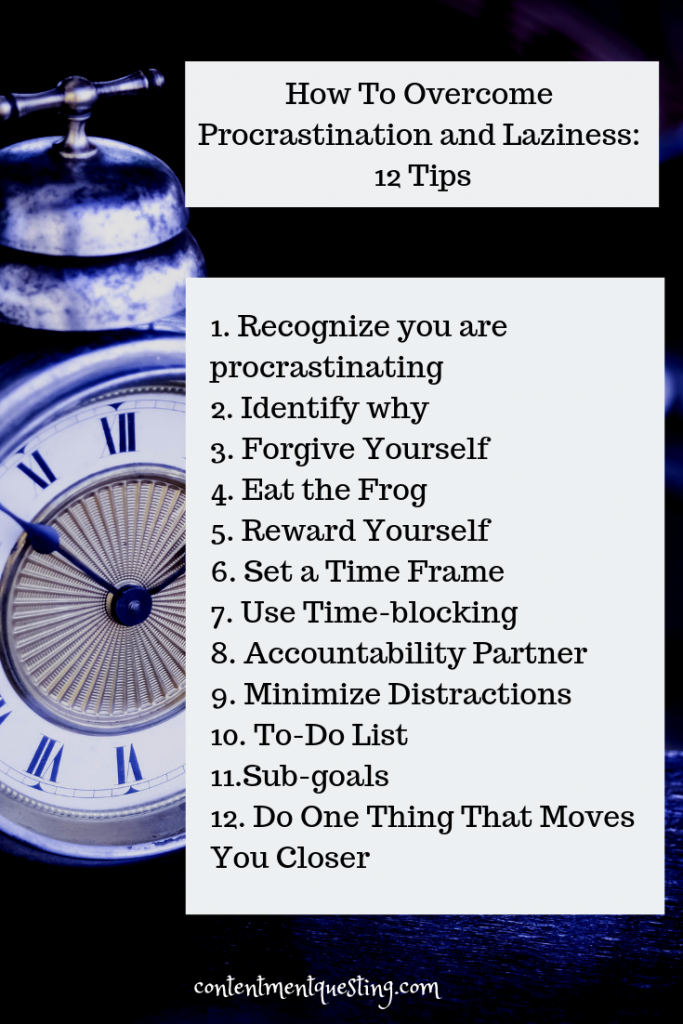 I also mentioned that I am (ironically) typing this at the last minute.  In truth, I hate doing things at the last minute.  I dislike feeling rushed and I want to make sure that I have enough time to correct something if I need to.  I did have another post that I had planned to publish, but when I re-read it, decided that I didn’t like it. It is Sunday night, and this is to be published early Tuesday morning, so that gives me tomorrow to edit and put the final touches on it.

What are your best tips for overcoming procrastination and laziness? Do you have a great procrastination story that you’d like to share?  I’d love to hear! Leave me a comment below!

I'd love to hear from you! Cancel reply